The project leader is Professor Nicolas Leveziel, ophthalmology department head at the Poitiers CHU. His team is composed of Audrey Leguen, a doctoral student, and Anaïs Balbous, a research engineer.

Age-related macular degeneration (AMD) is the first cause of diminished visual acuity in patients over 65 years of age in France and affects approximately 10% of persons over 60 and 25% of patients over 75.

Chorioretinial anastomosis is the most severe form of exudative (humid) AMD and is characterized by elevated frequency of bilaterality, that is to say damage to the other eye within three years. Taking this observation as a starting point, development of a human cellular model derived from patients suffering from this specific pathology could lead to improved comprehension of its pathophysiology.

« We have been granted the authorization of the French biomedicine agency to conduct basic research with embryonic stem cells on AMD, indicates Professor Nicolas Leveziel, ophthalmology department head at the Poitiers CHU and project leader. We are working in partnership with the Institut des cellules souches pour le traitement et l’étude des maladies monogéniques (I-Stem for study and treatment of monogenic diseases) with the hope of one day being able to duplicate interesting results.”

On a parallel track, Professor Leveziel’s team has been building up collections of biological samples, which shall be highly useful in the development of AMD cellular models in the Inserm unit directed by Professor Mohamed Jaber. The goal is to better understand the disease and, sooner or later, to be in a position to evaluate new molecules. 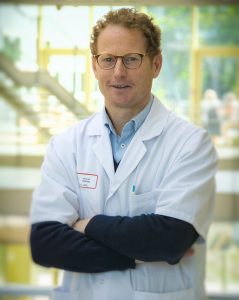 The project leader is Nicolas Leveziel, ophthalmology department head at the Poitiers CHU and university professor since 2013. After having carried out his clinical training and commenced his activity as hospital practitioner and university researcher at Henri-Mondor hospital in Créteil, in 2012 he joined the Poitiers CHU. In addition to the basic research project on age-related macular degeneration, he works as an investigator in several projects devoted to the same pathology.

I give for this project


I support this project